During the late 1990s undergraduate entrants studying full-time on computer science courses at English higher education institutions increased rapidly peaking at around 29, 000 in 2002-03. Over the subsequent four years entrant numbers quickly declined to around 17, 500 by 2006-07 before returning to more modest rates of growth. The impact of the 2012-13 higher education fees and funding regime changes seems to have been particularly pronounced for computer science. Numbers recovered somewhat in 2013-14, but remain 9 per cent lower than in 2010-11.

In each of the last six years, more students have begun computer science courses than physics, chemistry and maths combined. So there was obvious concern when it was noted that of undergraduates who qualify across all higher education subjects, computer science has consistently had the highest rate of unemployed graduates (see for example HESA’s statistical first release or HEFCE’s interactive data tool).

Computer science is taught at the large majority of universities – 90 of 130 English higher education institutions report students studying computer science. Most other STEM subjects are concentrated in a smaller number of institutions. 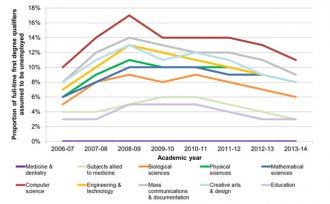 Institutions teaching computer science display substantial differences in the proportion of their graduates who appear to be unemployed (see the Unistats course assistant to view the employment and accreditation data for computer science courses).

* Full-time first degree qualifiers who provide a valid response to the Destination of Leavers from Higher Education (DLHE) survey. Based on qualifiers in academic years 2011-12, 2012-13 and 2013-14. Institutional grouping is defined by the average tariff score of an institution’s young (under 21) UK-domiciled undergraduate entrants holding level 3 qualifications which are subject to the UCAS Tariff. 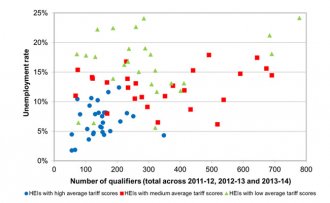 And there are concerns from industry about the skills, agility and work-readiness of those computer science graduates flowing into the workforce.

Time to reflect and review

In this landscape, it seems right to reflect and review. The Government has asked me to look at these issues through the work of an independent review. Our review is also tasked with generating recommendations about how to change accreditation so that it keeps pace with the needs of the profession. It is due to report towards the end of November.**

In this blog I wanted to present some of the basic data the review will draw on and solicit help to make sense of the data and even extend it. The review will need to take a closer look at the evidence, and the various ways to interpret it. Some of this will draw on publicly available data, but we welcome responses to the review in the light of other data and evidence. 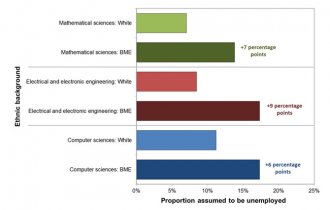 The existing base of evidence is already considerable. HEFCE’s recent publication on the destination of full-time students on first degrees provides more granular data than ever before. The most recent in Summer 2015 includes an examination of employment rates of graduates 6 and 40 months after they left higher education.

HEFCE’s interactive data tools allow anyone to delve into a number of largely unexplored characteristics of graduates’ employment. Here I am looking specifically at those qualifying from computer science. We explore one or two of the findings that the review team thought were particularly interesting. This is not a comprehensive analysis. Others may well identify other and different traits that could be of interest. But it is food for thought.

A question of background

Many will know already that computer science has a distinctive profile of students. Notably it has more men, students from black and minority ethnic backgrounds, and students with lower previous levels of attainment.

The statistics show that unemployment among black and minority ethnic graduates from full-time, first degrees is six percentage points higher than among white graduates. But interestingly this difference is smaller than it is for graduates from comparable subjects like electronic and electrical engineering or mathematical sciences.

* Full-time first degree qualifiers whose ethnic background in known and who provide a valid response to the Destination of Leavers from Higher Education (DLHE) survey. Based on qualifiers in academic years 2011-12, 2012-13 and 2013-14.

The data also allows us to look at ‘disadvantaged’ students – defined here as students who come from neighbourhoods with low levels of participation in higher education. 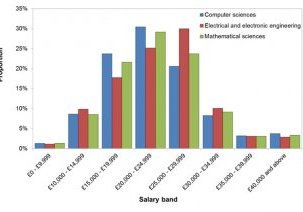 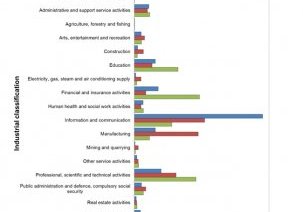 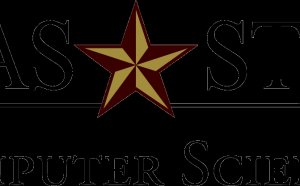 While you’re considering earning a computer science degree, you’re probably curious about what your options will be after… 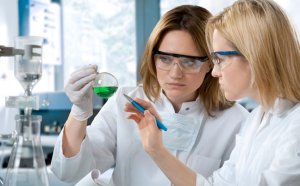 Job availability changes on a daily basis. Once our application process is complete, you will be considered based on your…